Ramelton
Dave Gallaher Ramelton was born to shopkeeper James Henry Gallagher and his wife Maria McCloskie, a teacher in Ramelton, on 30th October 1873. He was baptised in the First Ramelton Meeting House on 8th January 1874. His father ran a haberdashery shop at Market Cross, Ramelton in the premises now known as Crammond House.

New Zealand
The business was in decline and the family decided to emigrate to New Zealand in 1878 on the advice of Vesey Stewart who painted a glowing picture of what was offered in the Katikati settlement on the North Island. They left Ireland on the ship Lady Jocelyn on 15 May 1878. One of the children, James Patrick born 1878, was left in Ramelton in the care of the Corry family as he was considered too sickly to make the journey. It was the intention that he would join them later when he recovered. Sadly, this did not happen as he died in 1880.

Katikati
The family eventually settled in Katikati and after his mother died Dave went to Auckland to find work. He came to prominence as a rugby player after joining the famous Ponsonby Rugby Football Club. His sparkling performances helped them to the Auckland Club Championship in 1897 and then was picked to represent the province.

War
In 1901 he enlisted with the New Zealand Mounted Rifles and fought in the Boer War distinguishing himself by winning the Imperial South African War Medal and returned home as a highly decorated Regimental Sergeant Major.

All Blacks
On returning to New Zealand he made his debut for the All Blacks in 1903. In a glittering career he played 36 games (27 as captain). He was chosen as captain for ‘The Originals’ tour to Britain and Ireland in 1905. They played 34 games on that tour and only lost one match at Cardiff. Dave was injured for the match against Ireland in Dublin and it is reported that he visited his old home in Ramelton and relations at Ardnaree (outside Ramelton) during his free time.

He retired from rugby after the tour and became a selector and coach to the team.

WW1
Dave Gallaher enlisted for service in the Great War in 1916 at the age of 42 after hearing of his brother Douglas’s death at The Battle of the Somme. He had two brothers who were killed in the war. 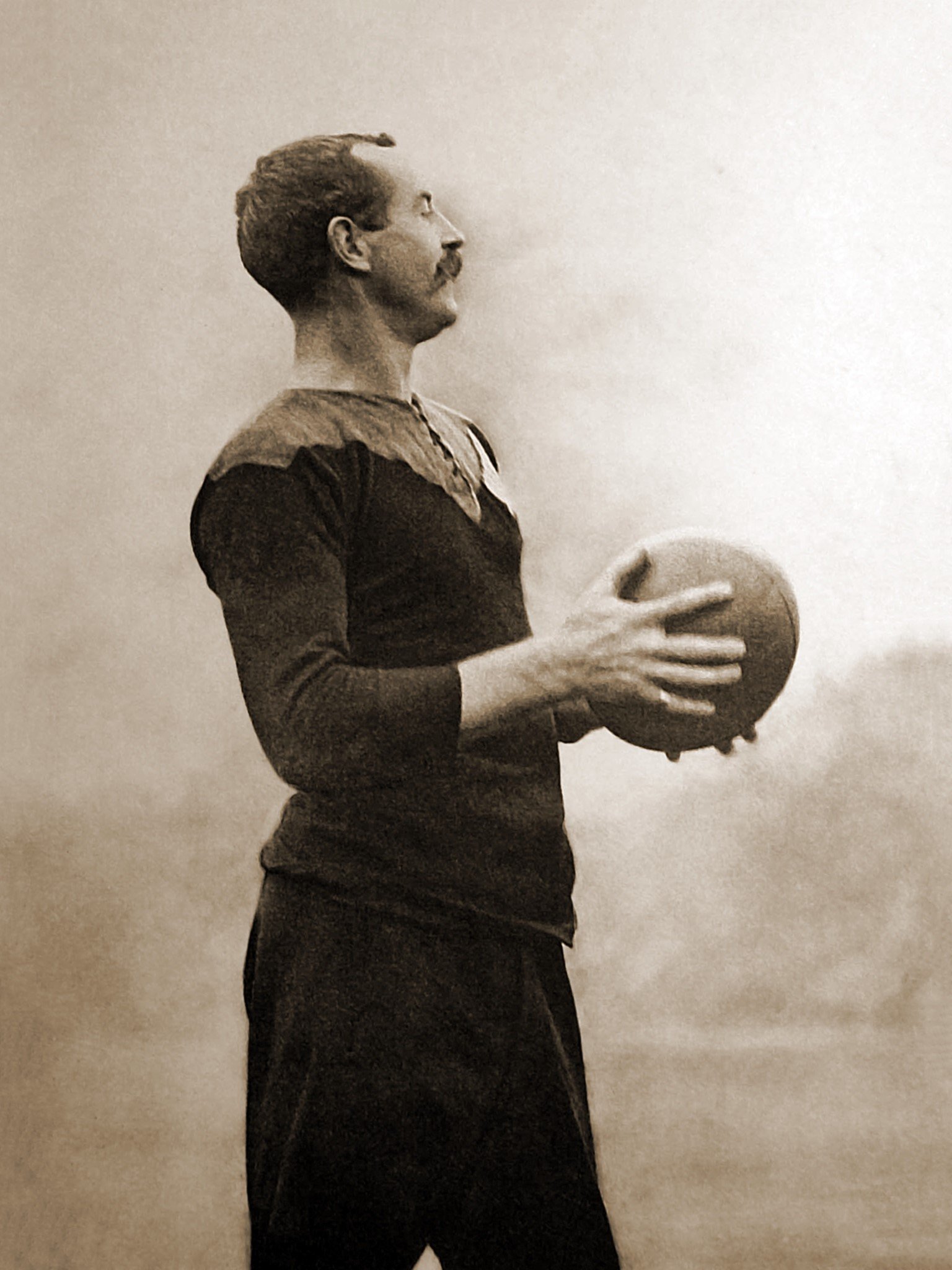 Death
Dave was also subsequently killed at the Battle of Broodseinde in Belgium by a fragment of shrapnel. He was one of 449 New Zealanders killed in the battle and he is buried at the Nine Elms Cemetery, Poperinge, Belgium. His death was widely reported in the New Zealand papers. He is commemorated in Auckland by the Gallagher Shield, which is the provinces major Inter Club competition. His statue stands proudly outside the famous Eden Park Rugby Stadium in Auckland.

2005 All Blacks
In 2005 members of the All Blacks team visited Donegal prior to their match against Ireland in Dublin to celebrate 100 years since the Originals Tour. The new Rugby Pitch at Letterkenny Rugby Club was officially opened by them and is known as Dave Gallaher Park.  They subsequently visited his birthplace at the house at Market Cross, Ramelton and crowd barriers had to be put in place outside the house, such was the local interest. Tana Umaga unveiled a plaque in honour of Gallaher above the old shop door. Ena Corry invited all the players into the house and some were so huge that they had to duck to get through some of the interior doors. We were told beforehand not to offer them any food as they were on strict diets but this soon went awry as they tasted Ena’s delicious shortbread. It was not long before a full box of shortbread was scoffed down. Ena was particularly attracted to Tana Umaga’s friendly personality and they spent a lot of time chatting beside the old Rayburn Cooker. The team subsequently attended an official reception at the Town Hall in Ramelton.   Other famous people present on the day included Sir Brian Lahore, Joe Rokocoko, Neemi Tialata, Conrad Smith, Gerry Collins and Darren Shand as well as Tony Johnston from Sky TV New Zealand. The Irish Times covered the visit, as did The Telegraph and the BBC.

They were all very impressed with the local hospitality and the visit was widely reported in the local and national press and in New Zealand.

In 2012 we had another visit from the All Blacks when Bryan Williams, who was the New Zealand Rugby Union President at the time. Also present were Billy Glynn, IRFU President and Mark Anscombe who was Ulster Rugby Coach. Bryan Williams told me he played in the famous game at Thomond Park where Munster beat the All Blacks in 1978.

Bryan said he didn’t have a good day and was actually dropped for the International match against Ireland the following Saturday. As luck would have it his replacement got injured before the match and he got back in the team and played against Ireland.

100 Year Commemorations
In October 2017, Drew and Christine Corry travelled to Belgium with a contingent from Letterkenny Rugby Club to attend the 100 year commemoration of Dave Gallagher’s death in the Battle of Broodseinde near Passchendaele on 4th October 1917. We were honoured to attend the various services in particular the one at Nine Elms Cemetery at Poperinge. The regulation gravestone No 32513 bears the silver fern and gives his age as 41.

During the renovations to Crammond House in November 2017 we found the names of the six Gallaher children written on a wall in the attic. The names are listed as follows

William, Tommy, David, Joseph, Molly and Oswald. They were written on the wall prior to their departure for New Zealand in 1878, some of them never to return. The names will be preserved as they are now covered with a glass panel. 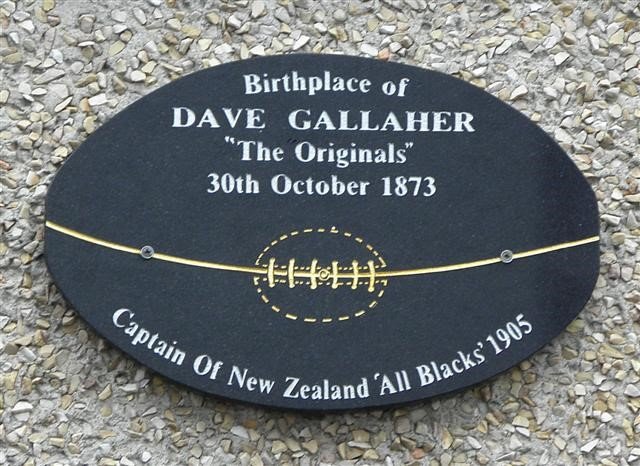 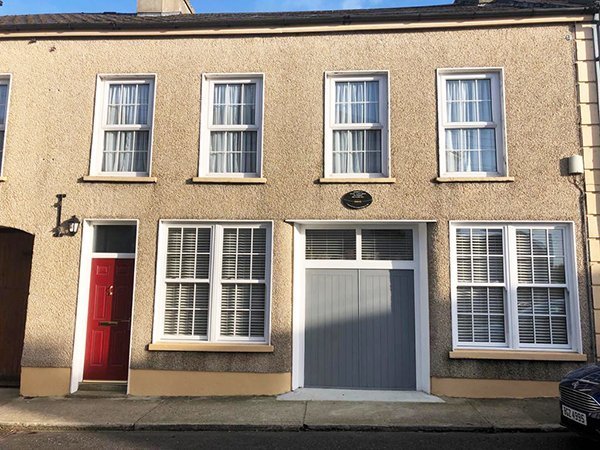